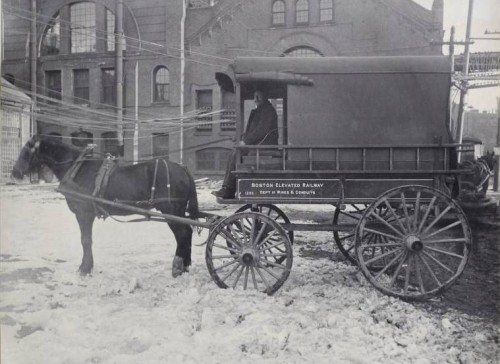 The Roxbury History Speaker Series is free and open to the public.
All are welcome

Bostonians have tackled problems with mass transportation for the past 200 years. Explore the challenges of Boston’s early mass transit systems through artifacts, maps, and photographs! The talk will highlight archaeological investigations at the Metropolitan Horse Railroad site in Roxbury Crossing.  See how horses pulled sleds and steam cars pushed plows during crippling winters, and teams of men pulled cars when horses could not! Come learn how our forefathers dealt with some of the same problems the MBTA deals with today, from crowding to crashes, and snow to strikes.

African Americans have participated in the military from the American Revolution to the present day, when the country they fought for denied them the most basic rights of citizens.

Moderated by Barry Gaither, Director of the Museum of the National Center of Afro American Artists. Gaither will provide information on veterans with parks named for them in Roxbury-Carter Playground, Ramsey Park and Justice Gourdin Veterans Memorial Park. Dr. Chad Williams, author of Torchbearers of Democracy: African American Soldiers in the World War I Era will offer an overview of the long history of blacks in the military, including anti war sentiment and pacifism.  Dr. Williams is Chair of the Dept of African and Afro-American Studies at Brandies University.

Panel members sharing their own experience will include The Honorable Charles Walker, whose father was a Tuskegee Airman.

Dr. Peniel Joseph, author of Stokely: A Life with Chuck Turner and Representative Byron Rushing, who both knew Stokely.  Turner worked with Stokely in 1968 while forming the Black United Front.  A lively conversation about Black Power, Stokely’s influence in Roxbury, and his legacy in light of today’s world and the Black Lives Matter Movement.

Dr. Peniel Joseph is Professor of History at Tufts University and founding Director of the Center for the Study of Race and Democray.